I’m drinking some my husband’s Chardonnay because I need to take the edge off.
I just put my kids to bed early because they were driving me crazy and wouldn’t behave.
We all needed a break.
Our “break” was earlier this weekend, when my family went to see the big rubber duck in Pittsburgh. It was an awesome trip, except the whole two parents being almost too exhausted to go part. We went anyway. It was worth it.
The kids loved the duck. I loved the fact that I could say “That’s the stadium Bane blew up in the Batman movie,” “That’s where city hall was” or “That’s where that bridge was that the bus was stuck on.”
The bridges in the downtown area make architect nerds like me drool. Art Deco, modern, double-decker, boring … they’re all within eyesight of one another. And to think, in May I’ll be crossing some of those bridges as a runner.
But the bridges didn’t compare to the duck. It was as big as my house, and a flock of geese and other ducks took to it like family. We all loved it, except my youngest son. He thought it was cool until we saw it’s face. Then it was “scary.”
The trip as relaxing and inspiring.
The rest of our “weekend” was not as relaxing. Lots of cleaning, complaining by everyone, shouted orders given out because no one seemed to listen. … It wasn’t my family’s brightest moment, wasn’t its worse either.
Which seems about the same as my fitness routine: ok, but just so. Nothing to rave about.
I’ve walked a lot though and have started back into yoga. Running is still spotty at best. I’ve also started to crochet during movie time with the kids.
Right now, I need to suck it up and refocus.
When you keep going just to survive, there is always a breaking point. I think I see that point. The road ahead doesn’t look pretty. I need my toolbox and a weedwhacker. 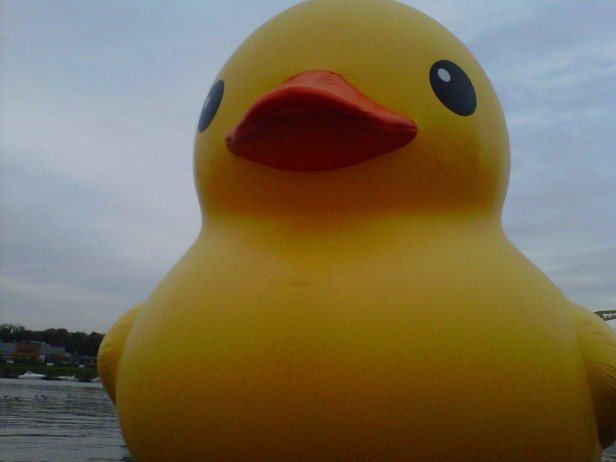