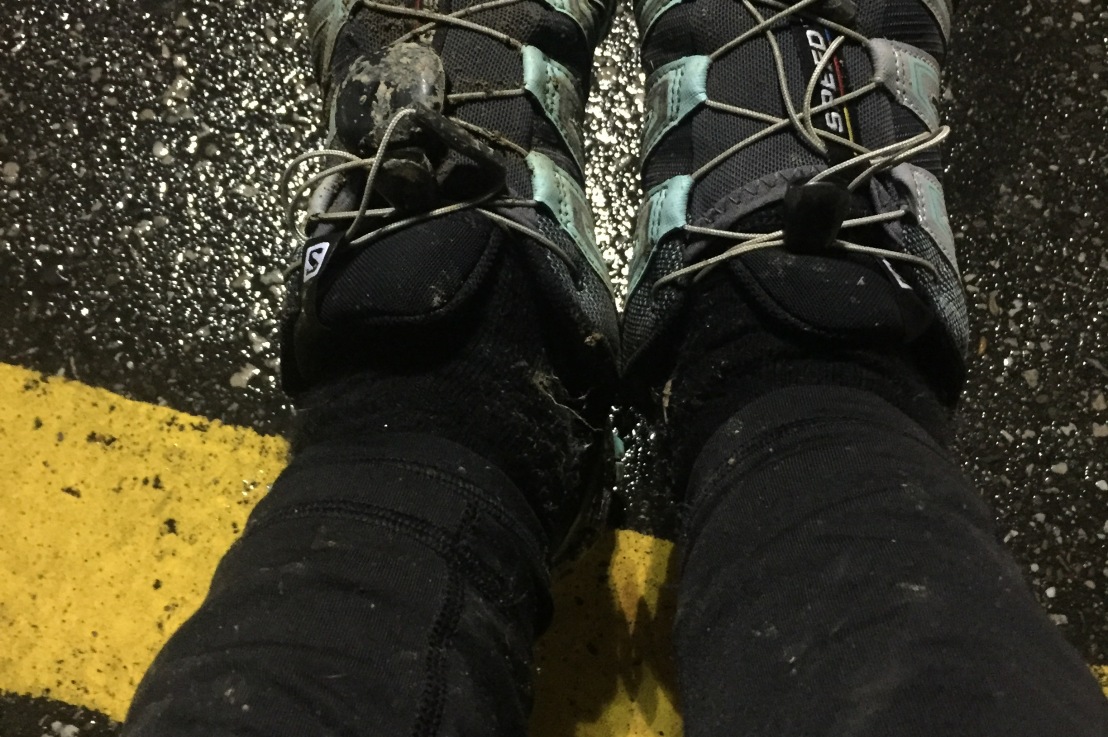 “I can’t see without my glasses.”

We’ll be OK. Just concentrate on the light ahead of you. He’s our running buddy.

“But it’s highly improbably that you’re ready for this. Jinxies, you almost lost your shoe. The mud is too much, we have to quit.”

In the book, “The Tao of Running,” ultra-marathon runner and author Gary Dudney gives you tips on releasing your inner trail beast. Say hello to my trail beast, Velma Dinkley.

You may remember her from her exploits in Crystal Cove, where she and her friends and a dog named Scooby Doo solved mysteries.

Velma knew how to solve the mysteries. Her oversized glasses and orange turtleneck hid her awesomeness. But they allowed her to hide her vulnerability, she was blind without her glasses and unable to navigate the world if her scientific logic unraveled.

So there I was trying to put my shoe back on quickly after almost loosing it to the mud. I was less than halfway through the first loop of my longest trail run ever. The snow and cold where so bad, my glasses started to frost over. So I threw them in my back as I wrangled with my shoe. Randy, my guide, patiently waited.

Then, we were back at it.

While running is just running, as Randy often repeated, it’s a puzzle for me. Foot placement, proper clothing,  and proper hydration and nutrition all play a role in making a run successful.

The book has a lot of tips on winning the mental game. I already used a few of them — mantras, and body checks mid race to overcome hyperventilating. But Velma is there. And like the dude who runs the Hunger Games; she knows when the  odds are not in my favor.


I am training for a seven-mile trail race in February put together by a coach with which I occasionally train. I know he likes tough courses, challenges that would break those who don’t properly prepare. That’s why Velma and I were running with Randy at dark o’clock. I had to be prepared.

It usually takes me about a mile or so to warm up, to find my comfortable pace and settle in for a run. But trail running doesn’t necessarily let you settle. You go up and down hills, zig-zag around trees, and jump over tree limbs. Getting comfortable and being unaware of your surrounding could be your doom.

And Velma reminded me of  that, every step of the way during that first loop. My hand warmers weren’t working. The snow was coming down in squalls at one point. Then I was too hot. My headlamp didn’t give me the visability I wanted. There were deer in the forest.

When we stopped at our cars after the first loop was over, I took a swig of my Tri-berry flavored Nuun. I told Velma to shut up and enjoy the mystery. We went back in the course, reversing our route.

Randy and I went back down the path. Velma was quiet, trying to retrace our steps as Randy had me lead us through the muddy and last half of the lap.

He knew how many switchbacks there were in this one portion of the course and counted them out loud. Apparently, there were 16. It was annoying o listen to hear him count them off. 1 … 2 …

I tried to count them as “Eight, I’m half way done with this section.”

As we went up the last and final hill, my tights decided to say “Screw you.” But then I saw the water tower, we ran  the last 100 yard to our cars. I was almost home.

“You almost talked yourself out of that last lap, didn’t you?” Randy said as he started cleaning himself up, car truck open.

“Yeah,” I admitted. And then I gave Randy a big hug. Velma and I did it. Without Fred’s traps and the Scooby snacks. Oh my, we did it.


In my next post, I’ll detail some of my fueling and other components of getting ready for the Hillraiser Challenge.

I do want to note, that besides being a Nuun Ambassador, I have been chosen to represent Skirt Sports, an athletic clothing line for women. I’ll give you reviews and other information about this company and how awesome it is in a later post.

So Velma and I are getting ready for the zombies by getting outside our boundaries, are you? Let us know how you’re doing by commenting.