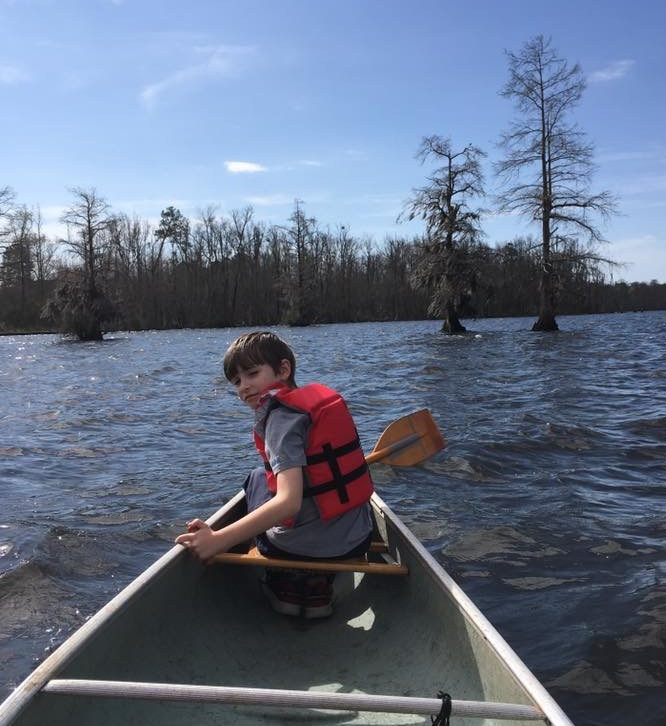 I think the powers that be don’t want my family to embark on epic adventures during Easter weekends.

Last year, we got a flat tire on our way home from the Outer Banks. We ended up staying an extra night in a hotel and taking a few expensive taxi rides. Mountain Kid 1 deemed it the worst road trip ever.

I’ll let you read about Mountain Kid 2 and Mountain Papa’s epic adventure this past weekend. The first part was published in the Chowan Herald, the weekly newspaper of which Mountain Papa is editor. The second half will be what went through my head during their trip. Mountain Kid 2 rates this adventure a 4, with 10 being the best and 1 being the worst.

Epic voyage ends in near disaster (From the Chowan Herald)

The Editor’s family is moving Edenton, so they needed to transport their canoe to town from Rocky Hock.

Instead of loading a long canoe atop a compact car, why not canoe the Chowan River to Edenton Bay?

The Editor and his 9-year-old son Robert began their 13-mile journey in earnest Monday morning. They saw lots of wildlife, many crab pots, fishing nets and water foul as they passed White’s Landing, Harris Landing and all places between Rocky Hock and Edenton.

When they arrived on the outskirts of Edenton mid-Monday afternoon, they were very ready to come ashore. However, an unexpected wind squall forced the Editor and his son into the Albemarle Sound. What had been placid almost serene waters turned to 2-3 feet waves. There was no paddling, only praying. Before it was over, the wind and the waves pushed the canoe to Bertie County shores by Merry Hill. Moreover, it was not a smooth landing to say the least.

The Chowan Herald would personally like to thank Tim Ivey, director of Statewide Regional Offices at Economic Development Partnership of North Carolina, for his assistance. Ivey provided a phone call, badly needed shelter and some towels while the Editor and his son waited for his mom (that’s me) to arrive so as to carry us home. Thanks again Mr. Ivey.

Thus, after the Editor recovers from the trip, he will write a story about Monday’s Chowan County Commission meeting.

Lastly, thanks be to God!

Love and patience (a mom’s perspective)

As I helped guide the canoe into an abandoned fishery’s waters, I was scared. A 13-mile trip in a canoe … I watch the History Channel and know that it’s no small feat. But my husband was determined to do it with our oldest son in tow.

They are skilled and had the necessary equipment including my favorite water bottle — from Nuun. All I could do is watch them maneuver to the river proper and pray.

My mom came up to help us move into our new digs. She, along with Mountain Kid 1 and 3, helped me pack up boxes, load our big furniture pieces into the vehicles and clean up the remaining trash.

Every hour or less, I checked my phone for a sign of life or death. Every ring or hum brought me straight to my phone. I hate being attached to technology, but this time, it was my line to two people canoeing their way through unknown waters.

The hours went by quickly as we moved our stuff. Shortly after lunch, as we went out to get another load of boxes. Then I got a text message.

The duo made it up to the bridge that separates the Chowan River and Albemarle Sound. It’s less than two miles from the end of their trip.

“I’ll pick you up,” I texted through my daughter.

They decided to head back out. The winds were calm, and they were fine.

About an hour later, I get a call. They can see their destination but the wind has changed. It’s rougher and blowing them out into the middle the sound.

I lived in West Virginia and Ohio for about 20 years. While living on the Ohio River, I could easily make out the colors of the cars on the other side of the river. The Chowan River is wide enough that you can see the buildings, but cars or anything smaller are hardly visible.

The Albemarle Sound is several miles wide, at least five in some places. If I stand in Edenton Bay, the destination of our canoeing pair, I can see smoke and maybe the outline of the tops of trees. But nothing else — the opposite shore is too far away.

My oldest boy and husband were in a 12-foot long red canoe in the middle of the Albemarle Sound.

My mom had a better head on her than I did as we discussed the current situation. She suggested we head to the county across the river. It was where the canoe was heading. She drove while I gave directions. The other Mountain Kids piled into the SUV, which has room enough for everyone. They loved adventuring in grandma’s car which is much cleaner and roomier than what they are use to.

At the first road, we stopped at the water’s edge and just looked. Not a damn thing, except some buoys, floated in the water. I did see a piece of land that stuck out a little from the rest of the coastline. That would be where they’d try to head, I thought.

We went back up onto the main highway, stopping at a gas station. I had mom stop as I called the sheriff’s department, which has a water rescue team. As I tried to explain what was happening, I got another call from an unknown number. Caller ID placed it in the county we were in.

Eureka! I hastily hung up with the sheriff’s office and talked with my husband to gave the phone to the homeowner. He gave me directions to his house that I jotted on the back of a grocery receipt.

With that, we went and picked up our boaters. They were standing outside, wrapped in towels with their clothes soaked through.

The wind and waves brought them into shore, but beside a retaining wall. The canoe crashed against the wooden pilings and took on water, so they couldn’t move it. The guys bailed and walked in the crashing waters of the Sound until they found a break in the retaining wall. Then they made their way to the closest house. Luckily for all of us, the owner was home on Easter holiday.

I have never hugged my son or husband with such a gratefulness in my heart before. After we got home, mom and I bought Mountain Kid 2’s favorite foods for a feast. My husband was sore and sunburned. My quiet son was still quiet and a little sunburned. But he was OK. As I watched him eat pizza and play video games with his brother, I felt a sense of relief wash over me. As much as I sometimes hate video games, this is part of he was meant to do. There is still a lot of brother and parent-son bonding left to do.

A few days after the disastrous trip, my husband and I went hunting for the canoe. What happened to the red canoe?

We went back across the river and marveled at the adventure from earlier this week.

The canoe wasn’t where they originally lost it, so we went down the bank, occasionally peering down the retaining wall into the sound below.

The wall gave way to a beach that was covered in driftwood and … our canoe. I saw the canoe in the distance and called to my husband.

I was the first onto the beach. Right under the retaining wall was the canoe, but it was split right in half. The ridge on what would have been the back was torn, exposing the inner hull. The split was right at the middle metal beam on the canoe and a little jagged. There was already a few inches of sand in the hull’s remains.

Further down the beach, we spotted the rest of the canoe. It was the same as the other half — the tip damaged with sand already covering the bottom. It looked like the canoe had been there for weeks, but it was just a few days. I looked around the last section of the boat and saw something blue and red sticking out under the sand and driftwood. It was only a few inches tall, but I recognized it — the shape of the bottom of my water bottle.

I dug it out the sand, and we took it and the tale of the canoe home with us. Of course, the kids thought the idea of a canoe split in half was pretty awesome.

From the wreckage, we saved a mostly empty bottle of tea, a wooden oar, a Nuun water bottle and, most importantly, two of my favorite humans.

It was another opportunity for us to count our blessing and remember how things can change in an instant. Cool heads prevailed this day — my husband and oldest son on the water as well as my mom on land.

Someone was watching over us. The day of the epic adventure, he or she was working overtime keeping my family safe.