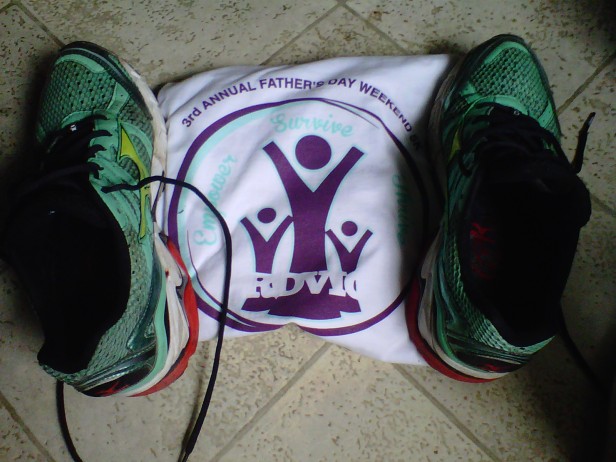 RACE: RDVIC Father’s Day Challenge
LENGTH: 5k, 3.1 miles
COURSE: Decker’s Creek Trail, asphalt, mostly flat
WEATHER: Drizzling with a heavy shower about 10 minutes into the race.
WHAT THE RACE BENEFITS: The Rape and Domestic Violence Information Center provides assistance to those who have been abused or are victims of rape.
THE RACE ITSELF: The out and back course began at Hazel Ruby McQuain Park at the entrance to the Decker’s Creek Trail. The turn around point was about 20 feet past the bridge leading to Marilla Park. The top runner did the course is a little over 16 minutes; top female in about 18. It is part of the Morgantown Area Grand Prix. The only bad part was the lack of restroom facilities prior to the race. They were closed due to recent vandalisms.
MY RACE: “I got this.” I’ve run this section of the trail hundreds of times. My husband threw down the gauntlet during a 5K the day before, challenging me to run a 26:20. I have been working on improving my stride and breathing. I tend to be a shallow breather during runs, especially stressful races. The first mile went well, I was going faster then I had before. Due to the rain, I decided to go without my tech and glasses and didn’t have any tracking mechanisms. As with the Coopers Rock race in April, I ran some with Jim Bailey, who sported the No. 1 racing bib this time, for a while. Then my experiment caught up with me and he pulled away.
I struggled through the second mile, mostly due to dehydration and over-confidence on my part. I noticed, however, that my new arm swing — going across my body — felt like it was keeping my feet going.
As I came about a half mile to the end, my former landlord came from behind and ran beside me. We’ve been in a few races together. My times have been close enough that one of my goals this year is to beat him in a race. He said he noticed that I’ve been out running and it looked like it’s been paying off. “You’ve gotten a lot faster.” I was on cloud nine mentally, but my body was struggling. I was able to keep up with my target for a while, then he poured on the speed about 20 yards from the finish line. My kick got out kicked. I ended up with what I consider a legitimate personal record — 27:32. My previous PR was on a course my GPS, along with several other runners’, said was too short.
POST-RACE ASSESSMENT: I ran as hard as I could this time. When I finished I wanted to collapse. My husband commented the night before that I don’t try hard enough because I don’t want to lose. I’ve always considered it more of a fear of failure. But he is right. This time I tried, and although the race was a slightly failed experiment, I still succeeded. It’s a benchmark, showing my new form works but I need to practice the various elements at the same time. That’s how you run — each part of your body works together to propel you forward. This race showed my arms and legs know what to do. I just need to work on maintaining my posture and deep breathing.
It was a fantastic way to end my first week of marathon training.