RACE: Sam Warner Memorial 5k
WHERE: Salem, WV
COURSE: The first two miles are a dirt path on a mowed area that passes for a rail-trail. It was muddy. Once you got into downtown Salem, the trail was small gravel.
RACE: It’s a start to finish race, starting a few miles outside Salem. You end across the street from the post office. The race coincides with the town’s Apple Butter Festival, so as you finish you run through the festival grounds. There are ribbons and shirts, along with plenty of apples and other tasty treats at the finish line. The bib tear-offs are placed on a board with the times on them, so you know pretty quickly after the race whether to stick around for the awards ceremony.
THE PERSONAL RACE: we’ve done this for the past two years as a family, three if you count my husband’s solo run. I love, yet dread this race because I always run this race with the boys. I have one kid in the stroller, the other runs/walks besides me. And he talks … a lot. I like quiet runs, but I have to make an exception in this case.
I thought I lost my two oldest kids during the first half mile until I saw my oldest son walking ahead. I caught up with him and we ran and walked the rest of the race together. I tried to make a game out of it.
“Do you see the ambulance up ahead? Let’s run to them as soon as we get past that tree.”
We had several people encourage him as they ran or walked passed us. I don’t like passing people and then having them pass me, so I had to calm myself several times. It wasn’t a race, it was an adventure we all get to travel on.
We described the smells and sights around us and talked about what we thought would be at the finish line.
It was a fun race. Very relaxing. The field was bigger this year, so it was nice to see old and new faces in the crowd.

Now for a shameless plug. I’m applying for a contest, so forgive me. I wear Mission Wave Inspire 8s to train in. I love my emerald green shoes, to the point I’ve named them, Go’s (as in green means go). The company is a major sponsor of next year’s Ashville (N.C.) Marathon which goes through the famous Biltmore Estate. I’d love to run this race since it’s near my family. I plan to run it in Mizuno Wave Sayonoras or another pair of Inspires. A free race entry would make the trip a little easier on my family’s budget. 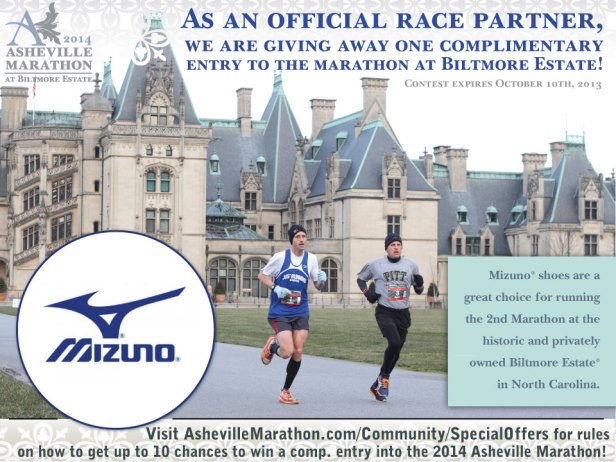