CUMBERLAND, Md. — She paced to the top of the bridge, hunched over in a dirty, once white comforter. As she reached the end of the railing, the woman with straight brown hair kisses the steel and concrete twice before turning around going back down the bridge.
My eyes kinda met hers, all I saw was brown glass, long empty.
“Why is that woman wearing a blanket mom?” my daughter asked in a whisper.
“I think she’s homeless and she’s probably cold,” I said as we walked down toward the downtown district to M & M Bake Shop.
Running into a homeless person while waiting for my husband to finish he Queen City Marathon didn’t unnerve me, it was her, how she appeared well-fed and neat but her eyes … I just can’t shake them.
But I didn’t have time to dwell in it. I had three hungry kids walking with me.
The bakery was awesome. It was old school, no fondant with colors airbrushed onto it. Just icing, cakes and doughnuts. The kids got to watch someone frost a bunny cake while I paid for our doughnuts and cupcakes. Delicious and the staff was friendly.
We also explored the two museums near the C&O Tow path and Great Allegheny Passage. We learned a lot about Western Maryland. We even visited a little cabin George Washington stayed in prior to the Revolutionary War.
And we played a lot on the playground near the rail-trail, which was also near the last mile of the marathon.
My only complaint was the lack of preparation on my part to make sure everyone stayed adequately fed.
Every race, my kids want to raid the food set up for racers. I think if they see food they automatically want to eat it.
They did better this time, but I still didn’t pack enough to keep them satisfied.
I still think of that woman on the bridge. How many times did she cross the bridge? What led us to that spot at that time so we could see her? The light in her eyes was gone. Expressionless, just part of her blank face.
She reminds me of how my life could have been like hers if I did x,y, and z instead of a,b and c.
So I decided to push that a step further. What in the comforted woman’s childhood pushed her toward her bridge ritual? How can I make sure my daughter is strong, confident and able to deal with the ever-changing world?
The short answer is I can’t.
As a parent, I must do my best and hope for the best. I also must do this as an employee, runner, spouse, etc.
There are times when things won’t work out the way I hoped. There will be many times like that.
But I will not let my light go out. I will fight for my kids’ lights too. And I will help their lights glow bright.
So I’m putting myself through a little challenge. One weekend in June, I have a chance to attempt to be the “ultimate runner” though a series of short and long races. I know I’m not the ultimate anything, but I feel I have something to prove. 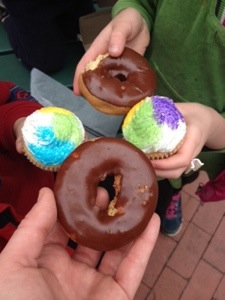