I wish this was a review of the Dash for the Darter, just a straight review without fluff about unicorns and the magic of running.
But the week before and after the race was so much more than that. The race itself was more than that. 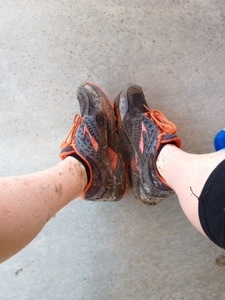 RACE: Dash for the Darter
WHERE: Burr Oak State Park, outside Glouster, Ohio
WHAT IT BENEFITS: A division of Rural Action that is devoted to restoring the Sunday Creek watershed. The darter is a fish that lives there.
COURSE: It began on a paved road uphill heading toward the park’s Buckeye Trail. The trail was muddy from rain that fell the night before. It started immediately with a single-lane downhill with an immediate uphill. Then the trail did a lot of twists and turns and ups and downs. We looped back toward the trail entrance and went downhill back to the start/finish.
THE RACE FOR ME: I thought I knew what I was getting into. I did the race last year. But the course was altered with the paved portion. According to my GPS it added 2/10ths of a mile.
Anyway, the uphill start was rough. The first mile was rough for me. They have the worse parts of the course. And with the mud, you could see where others slid. So I stayed in the mud. And my new trail shoes held up well.
My goal was to stay behind this couple who were running to celebrate their wedding anniversary. When I lost them near mile two, my goal changed to getting to the water spot.
I said thanks to all the volunteers who were at the critical turns, but I didn’t find a water stop.
What I did find was a man who was coming behind me. He slipped in the mud as I moved over to let him pass. He caught himself, doing a near perfect plank. During the last half mile of trail we went back and forth — I’d take the lead and then he would. When we got out of the trail, I went ahead and raced to the finish.
It was rough finish. My legs were shredded and the downhill was torture but I finished.
TIME: I finished in about 42 minutes. It’s several minutes faster than last year despite the longer course. I would have been faster if I hadn’t stopped to let some people pass. 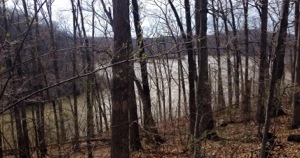 WHY THIS RACE WAS SUPER AWESOME: this race marked the anniversary of a not-so-great milestone in my career as a parent. It started a sequence of events that has turned my family around, for the better I think.
While the first mile sucked, I kept asking why my training failed me. But was I progressed through the woods, I found my answer. My training didn’t fail me, my mind was. It was filled with doubt and after the hardest hills, my body said “I got this.”
It was like Race for the Gold all over again. I was happy. My legs felt like crap but I was still going. I felt like a kid playing in the mud puddles. And when I crossed that finish line, I knew that trails are where I need to run.
Yes, I get freaked out by ticks, but it was beautiful, challenging and a fun adventure.
My family has learned so much in the past year. We’ve had our ups and downs but the journey has been worth it.
Now to conquer my next half marathon in May.