Today, Mountain Kid 2 turns 9. He was the biggest baby out of the three, almost 10 pounds.

As of now, he’s the middle kid, in between his older sister and young brother in height. But he has the one with the biggest heart. (He’ll tell you he has a dark heart.)

I knew he was different as soon as he looks at me with his newborn eyes with his brow knitted in deep thoughts. As a baby he cried, but not a lot like his siblings. He was quiet and entertained himself with his thumb and other toys. He would react to things going on at the house. When someone fell down, his eyes would get big, as if the act of someone else falling startled him.

He rather play with Legos than play outside. When he is outside, he unleashes an engineer’s imagination, turning hills into fortresses and sticks into weapons and tools.

If you look at my kids, two of them look like me, the third like his dad. But when you compare them to their parents emotionally and mentally, Mountain Kid 2 is my kid.

He’s smart and sometimes gets an ego about it. He hates the idea of running a 5K, but could probably run a 5K if it was wrapped in the guise of play-time or adventure. For MK2, baby animals are cute, learning about them where they live makes them cool.

As an athletic family, MK2 doesn’t fit the mold of a distance runner. Like me, he’s a sprinter. He can outrun the fastest members in our family in short distances. But long distances are just work, which he hates. I sometime hate it too. He hasn’t learned about the magic of running yet.

As an adult, I love sprinting. It feels freeing. But the distance stuff takes effort. And both MK2 and I sometimes would rather stick with something easy. So how do you get a kid who doesn’t like to participate in sports to be active?

Our first, and probably most effective, strategy is getting the other kids involved. While MK2 likes to take things easy, I think he loves to compete against his siblings more. We usually play a chase game that my husband learned during his college track career. The first person, who is usually the fastest, starts about 100 yards or so from the next person. When the first person gets half way between the two, the second person takes off while the first person tries to catch up.

This is one of the few ways MK2 and MK3 are able to beat their older sibling. They love it. They also beat mom and dad occasionally, which is a special bonus. 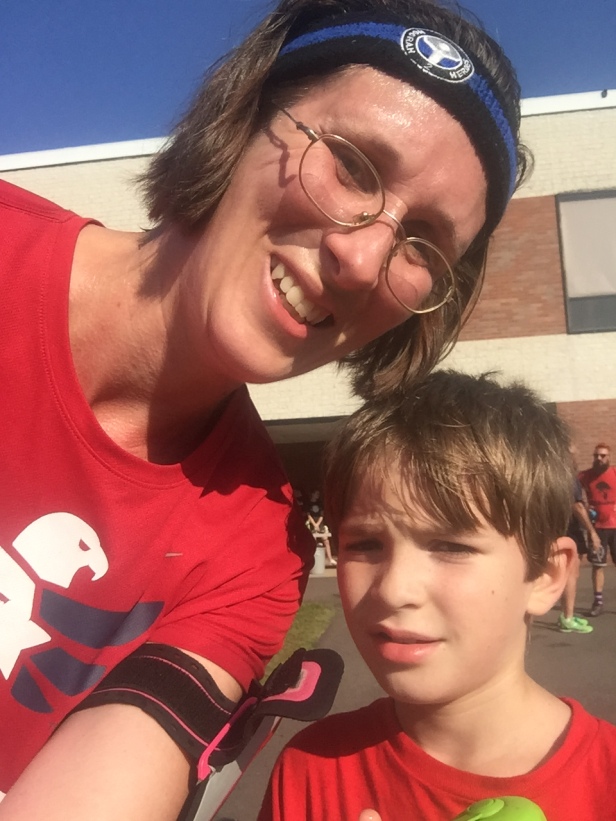 Mountain Kid 2 and I at a recent race. He had declared a moratorium on 5Ks. He doesn’t like them, but likes to run.

The family that explores together, exercises together. My kids, especially MK2, like exploring and finding cool things in nature. We try to vary the places we go. Since MK3 loves to run everywhere, we encourage everyone to run from point A to point B — maybe between telephone poles or some rocks. If a certain spot becomes a successful discovery zone, we go again, heading back to where we found whatever plant or critter caught our kids’ attention. The adventures are what the kids remember, not how many miles we did or what our pace was.

Incentives are great too. We’ve bribed our kids with toys, trips to the city swimming pool or beach, ice cream …

MK2 now exercises when he wants, which is actually more often than not. Like me, he stays in his head a lot. Exercise offers a chance to escape the mental game and just be. I think it’s slowly starting to click with him. And I can’t wait to see what the next year holds for him. Happy birthday MK2!