This past weekend, April 28 to be exact, marked my runversary — the date of my first race since reintroducing a fitness component to my busy life. I know this post is late, but allergies/illness/whatever has made thinking or anything head-related difficult.

I wish I could call this six years of weight-loss triumph. But I can’t. I lost weight and gained a bunch back.

I have not found a word that accurately describes my fitness journey. Right now, I can call it an adventure — a gloriously messy, brilliant, eye-openingly scary one at that.

Here are a few photos from each year of my adventure and a little look back. 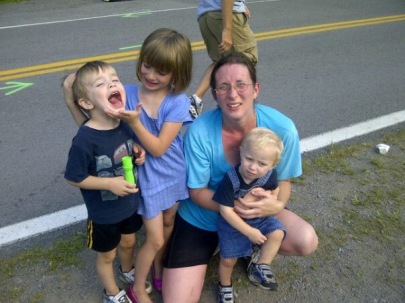 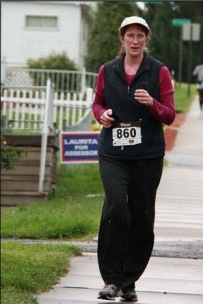 2012 was a year of firsts. After visiting a primary care physician for the first time in decades, I started my plans to get back into fitness.

I was automatically drawn to running, as I loved it in school. I participated in my first 5K on April 28, 2012.

I was hooked. I also participated in my first triathlon. I lost weight and felt awesome. But I wasn’t eating properly and was still exhausted just as much as when I was heavier. My diet was almost non-existent. I ate at home, binging right after work, but skipped regular meals or ate very little.

I learned I can’t do that again as it compromises my ability to perform well.

The oldest Mountain Kids and I participated in a color run.

My workout buddy became more of a coach and inspiration.

In 2013, Mountain Kid 3 grew an awesome three-year-old and became more of a challenge. He was walking, talking and running. He wanted to be just like his older siblings, being way more of a daredevil than I would have liked. To reduce my stress, I made MK3 my workout buddy. He was my weight during plyometrics. He ran and walked everywhere with me. We climbed, laughed and napped as a team. MK3 is still a big fan of exercising.

This was also the year I completed the local grand prix, 8 out of 10 races in the series. I worked hard on that and look back fondly on all the trips to the gym and training runs.

I also got to see Mountain Kid 1 fly during a local color run. I knew she was fast, but in that race, wearing her pink dress shoes, she flew. She’s happy when she runs. That makes me happy too.

My second half-marathon. The person carrying the flag, Jo Foster, was a big part of my life in 2015-16.

Getting fancy for our first Girls on the Run race.

This was also a year of firsts. For MK1 and I, this was the year of our first Girls on the Run race together. She thought it was awesome, as she got to dress up with hair-dye and flowers.

I also ran my first race in Wheeling, WV. The Ogden Newspaper Classic Half Marathon had been on my radar for a while and I finally trained and did it.

It was a lot of hills, but the thing that stood out the most was the Marine veteran carrying the flag. He’s a member of Team Red, White and Blue, although I didn’t know that at the time. A few years later, we became friends, leading Team RWB rucks and working out together. Joe Foster is one heck of an Marine, athlete and awesome human. 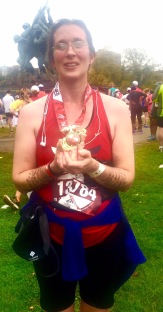 My arms had names for every mile of the 2015 Marine Corps Marathon. I ran a freakin’ marathon! 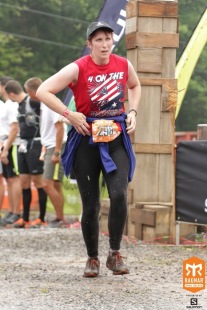 That’s me after the Red loop. 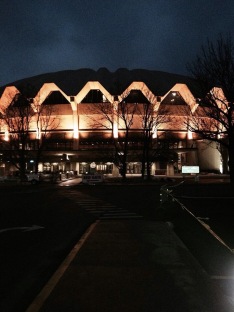 My first activity with Team RWB was on a cold January morning.

In January of 2015, I officially joined Team Red White and Blue, participating in my first group activity at dark o’clock on a Friday. I was hooked. Through the nonprofit, I was able to participate in my first Ragnar relay and run my first marathon, the 40th Marine Corps Marathon.

I remember feeling so out of shape when I did the Ragnar event, in the mud and rain of the Appalachian Mountains. But as I look at this photo now, I look strong, tired and determined.

It was also the year we moved to Wheeling, West Virginia, and I started work on organizing a Team RWB chapter there. Since its inception, it has grown by leaps and bounds and I am so proud of the members up there.

My first GORUCK event. I suck at overhead carries.

Happiness and sadness all in one day.

In 2016, I was introduced to Hoorah 2 Heroes, a great group of police officers, EMTs and their supporters that emphasizes functional fitness. I wasn’t able to attend as regularly as I would have liked, but I admired how supportive the group was of its members and how rewarding every workout was.

This was also the year of two significant deaths in my family. My father died in March. In June while we were on our way to a half marathon in which the kids and I volunteered and Mountain Papa ran, we learned of the death of Uncle Bob, a World War II veteran who was the patriarch of my husband’s family.

As my kids tried to hand out medals and water without getting trampled on, I was filled with a sense of sadness and gratitude. Our relatives who passed were no longer in pain. They were free of the suffering of the world. It also brought to light how precious and sacred life is and how each moment is a chance to bring joy into the world.

I also participated in my first GORUCK event, again through a partnership with Team RWB. It was life-changing. Pushing my limits and going past them, along with the emotions that were still stirring in my soul due to my father’s death ignited something in me. I think this was when I didn’t look at the attempt to be well — physically and mentally fit — as something I could kinda do but not commit too. I started the process of building something more substantial fitness-wise this year.

Through Charity Miles, I went on my first trip to the West Coast, to San Francisco.

High-fives at the finish line of the Hillraiser Challenge.

In 2017, I ran the Hillraiser Challenge, two races — one night and one day — in one. Like GORUCK and the Marine Corps Marathon, it was a test of my limits. I came out so much stronger for deciding to attempt both races, instead of the one I originally signed up for.

It was to be my last race in West Virginia for a while, as we left the mountains of Appalachia after 20 years there. We moved back home to state of my husband’s forefathers, North Carolina.

The stresses of the move and being somewhere new caused me to do things outside my norm. As a result I gained weight. I also gained a new appreciation of living in a country where the beach and mountains can be accessed through a few-hours-long drive.

I also won a trip to San Francisco, my first trip west of Texas. It was short but amazing. I got to meet members of the U.S. Women’s Soccer Team!!! 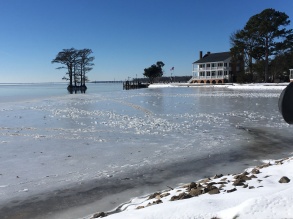 Winter on the water.

A 5K and polar plunge in one!!

20 years ago, I graduated from this school. This year, I ran the streets I once roamed as a mom.

This year isn’t over. So far, I knocked a few items off my bucket list. I participated in the Krispy Kreme Challenge at my alma mater, N.C. State. I participated in a polar plunge that was tied in with a local 5K that benefited the local Special Olympics program.

I also experienced my first winter in the South in about 20 years. Everything, looks a little different here, even snow and ice.

We moved again. Like last time, my routine was thrown off. It’s still thrown off. But I learned from the last move and am unwilling to let the same things happen again. I’m being a little more vigilant regarding certain things, although this recent illness has thrown some of my plans out the window.

In January, I had plans to do all of these races and events. As I sit here, I am committed to be  cheerleader at two events and a participant in another. All of them are this month. The rest of the years is going to be whatever I can imagine.

My imagination is stymied by real life a lot. But this time, I’m a bit more wiser and unwilling to give in to the negativity and drama. I’m unwilling to let the voices in my head overrule the voice in my heart.

There is still a lot of work to do. For those who have been following my journey since the beginning — thank you. For those who picked it up midway — you’re awesome and I appreciate you. For those who are just joining in — you’re in for an erratic, scary and fun adventure. Doing the things that scare you but you can’t get out of your head are the best kind of adventures.

April 2012, a few days before my first race as an adult-onset runner.

April 2018. I have always stuck out my tongue when concentrating. Now I’m just a little more color coordinated and have great leg muscles.