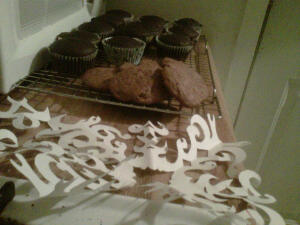 Relieve stress by doing things you enjoy, such as getting creative.

It was a cold and dreary afternoon. The kids were acting crazy — as they usually do when they’re out of school due to inclement weather.
But I had a smile on my face and in my heart. The warm smell of cinnamon was filling my house as my Mexican mocha cupcakes baked in the oven.
I just started cleaning up the small paper remnants from a hard hour of making paper snowflakes. My heart was full and my mind at ease.
As part of working on my “drama,” I have reached out to some professionals who can (I hope) put me back on the path I wandered away from.
In one office, they have a poster listing ways to relieve stress, such as being creative, exercising and/or meditation. While a natural way for me would be running, my training has been slack. I can’t physically pull the kind of mileage needed to put my mind at total ease. It’s too cold and I can’t stay on a treadmill for that long.
So after a day of struggling with the kids, I pulled out an old art notebook. I cut a few pages into squares and began making paper snowflakes.
Life instantly felt much better.
I started doing paper snowflakes several years ago, as a tradition with my children. I’ve gotten to the point that if they make a reasonable request, I can make a snowflake out of it.
This year’s theme was Star Wars and Batman. I also did some snakes/vines for my youngest son and a flower-themed one.
I also baked. Some of my earliest and warmest memories are of my mom and grandmother baking. I remember eating dough off the spoon or the stuff leftover after the dough was rolled and cut.
Yes, it’s a fattening hobby, but I love seeing how much I can tweak the recipes to get something different.
I ended up making a ginger snap recipe and modifying it to make drop Moravian-spice cookies. Moravians are a religious group that have a large community near where my husband is from. They make these awesome wafer cookies that have white pepper, ginger, cinnamon and mustard in them. The combination is … Wow.
My kids like soft cookies, so I tried this different version. They like mine much better but the spice ratio is off. I’ll post the recipe once I get my recipe right. The traditional recipe for the cookies can be found at Food Network’s Moravian spice wafers recipe.
I also made my take on my mom’s crazy cake. It’s crazy cake because the recipe doesn’t call for eggs, milk, butter, etc. It’s more of a science experiment. I turned the chocolate cake into a Mexican-mocha cake. I’ve included the recipe and my variation on the food and nutrition page.
I’ve also follow my online running group’s motto, “Suck it up, princess” and working on being more active. This isn’t just increasing my workout time. I’m also doing more at home and work, trying to streamline routines and clearing out the clutter.
To do this requires some creative license on my part. After being at the same jo and a parent for seven years, I’ve become a creature of habit. Certain things get done at certain points in the day, week, year, etc.
In a workplace and home that constantly evolve, I have to adapt. This means letting my daughter ignore my pleas to move her legs while her youngest brother jumps dangerously close to her outstretched appendages. It’s pointless to force her to comply in that instance.
I’m also hoping that by this time tomorrow, I’ll have a serious training plan with which I can come back stronger in my physical fitness.
There are still many miles to run, many smiles to make.
What will make you smile today?
On a side note, I hope to become more vigilant about posting to this blog’s Facebook page. You can search for “Running mountain mama.” I hope to soon be able to log my workouts and post other running- and parenting-related feeds on there, once I figure out how to do so. I will also post previews, when possible, of upcoming posts.