Ever since I was old enough to remember, three things have carried me through life: Family, music and running.

I remember getting teased on the bus because I always hummed while I rode. I have a song in my head when I get up, when I’m bored, and before I fall asleep.

I also ran. I ran until I was exhausted in fields near the many apartments I lived in as a child. I ran around my grandparents’ yard and make obstacle courses during vacations. I ran in school, though I preferred throwing 8-pound shotputs and light, rubber discuses to let my aggressions out.

Like those days in high school, I’ve started, again, on a path of discipline, which requires me to look at my life more critically than I usually do.

Unfortunately, this brings out the best and worse in me — a competitor who is hardest on herself. Who takes every joke as a slight, every chore as a contest and every drunk text as something more than what it is — a text sent by a drunken fool.

And during the holidays, it’s hard to see be happy and full of excitement when you’re constantly looking at the flaws. As a perfectionist, I see a lot of them, many that aren’t even there.

Instead of thanking Mountain Kid 3 for helping make pancake batter, I scowl because of the four spoons he put in the mix to help stir it.

Instead of spending time with my family on Christmas, I plot how to get the floor cleaned up so I can get my workout in.

You don’t need to look into my eyes to see where my demons hide. Sometimes they are on my face. I can made some of the best angry Mom faces, or so my kids’ reactions have told me. And like many parents, who aren’t use to having all three kids home at once, my demons were ready to revolt. My routine was out of whack.

This Christmas, I escaped for a bit. I went to a 3-mile run without my technology as the kids has drained my cellphone’s battery. I must admit, it was a sucky run. Everything felt heavy. My sinuses were stuffed up and my mood was as gray as the sky overhead.

As I ran, I felt heavier as the run progressed. I kept worrying about how sucky the run was up to that point. It looked like it was going to snow. I am horrible at telling distances and didn’t know how I’d determine how far I ran.

Then I caught a glimpse of my reflection in some store windows as I passed by. I had a little more of a gut than I thought I’d have this time of year. But I could see my leg muscles. My arm muscles looked good in their gold sleeves and I wasn’t slouching. I realized I actually felt pretty good, except for my sinuses.

I ended up going to the end of the fence by a lock and dam on the river. I felt better as I sang “Radioactive,” by Imagine Dragons and Fall Out Boy’s “My Songs Know What You Did in the Dark.” But by then the sky was almost black, so I headed home. The run sucked, but I felt better. My demons decided to hide again.

A few days later, I laced up again. This time I did the reverse of my hill run, which is still a lot of hills. This route took me up the usual downhills.

I was teched up. I turned on MapMyFitness and added my run playlist. I started with “Eye of the Tiger.” By the time I hit the trail part of my run, I was well into the Foo Fighters and Fall Out Boy songs. By then, I had run my first sub-10-minute training mile of 2014.

I felt it in my bones, I could tell this run was a sign of things to come.

Yes, some runs feel like they suck, but that’s just what you think. Each run is a chance to improve. Sometimes the improvement is just showing up and doing it, which strengthens your discipline.

Other times, you surprise yourself by seeing something pay off in a way you didn’t expect. For me, seeing myself in the windows and realizing my body didn’t look as tired as my mind thought I was, became something powerful. All those crunches, push ups, etc. (sometimes with a kid sitting on me) looked like they were paying off.

Being able to finally see and hear a sub-10 minute mile was a big ego boost. I felt like I’ve been struggling all year due to life demands. It was comforting to know I can still run that fast.

Most of all, during my runs I had time to think. By becoming “disciplined” in order to achieve my goals, I was also becoming inflexible. I lost sight of the fact that there are many ways to reach a destination. The best way is to have fun and enjoy the journey with the ones you love.

I realize in my last post, I have a lot of goals. Maybe too many. I think I’ll concentrate on the most important one: Laugh, love and live. Oh, yeah, and run. Because I can’t seem to do the other three without running or music.

If you had only goal this year, what would it be? What steps can you take to make it happen?

Good luck, and if I don’t write before Jan. 1, have a happy New Year! 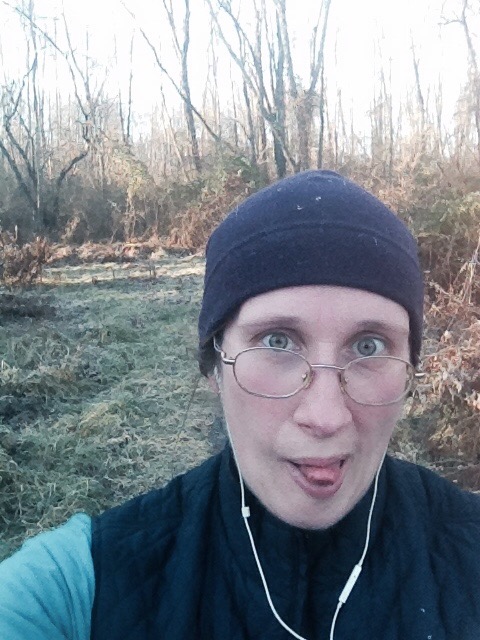