The more appropriate title: How a local race and Clara Santucci renewed my family’s love of running

Song of the post: Brighter than the Sun, by Colbie Caillat

ON A HAMMOCK IN A YARD — I’m hiding. As the kids yell inside about who is going to do dishes, I’m in their hammock, finally taking time to write.  It feels awesome.

This past weekend, we participated in our first races since moving to our new home. They are the Debbie Green races. The  Debbie Green Memorial 5K was this  year’s West Virginia championship for the RRCA, a national running organization. In 2016, the race will be the national championship.

All the proceeds help the Debbie Green Foundation. In the 1970s, Debbie was diagnosed with leukemia when she was 4. Her younger brother, Ron, was 2 at the time of the diagnosis, and is the race organizer. But when he speaks of Debbie and his family’s ordeal, it sounds like it happened yesterday. It’s great to see an organizer who is dedicated to his race’s cause. 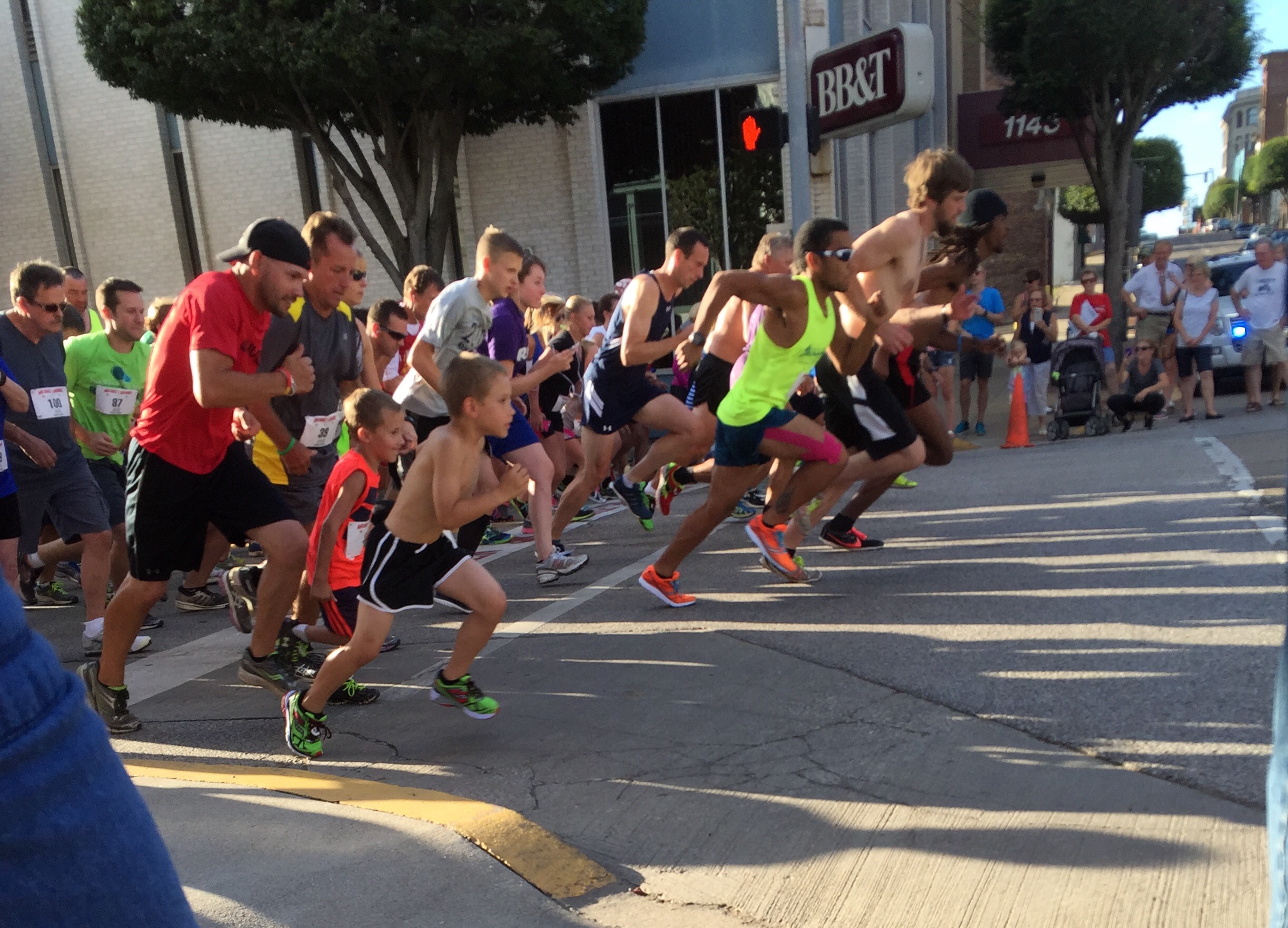 This year’s mile race was dedicated to Michael Carroll, a teen who died to cancer the year before. The Wheeling, W.Va., native created Michael’s Meanies, stress relief toys given to pediatric cancer patients who can “crush” the disease via the toys while undergoing treatment.

The race was held Friday, the day I learned a longtime co-worker of mine had died of cancer. I dedicated my miles of the day to her. It seemed very fitting that we helped out others battling the disease that claimed her life.

My kids didn’t want to race. Since the move, they really haven’t wanted to run. And I haven’t gotten them up for 5 a.m. training runs.

So they went in cold with an “I don’t wanna” attitude. Mountain Kid 3 stayed with me as we cheered the oldest mountain kids and Mountain Papa on.

The top runner was a local man who finished in under 5 minutes. Mountain Papa finished under 8, with Mountain Kid 1 10 seconds behind him. Mountain Kid 2 finished with a respectable 10 minute mile.

The course was the first mile of the 5k with another loop so everyone started and stopped at the same place. Some people got lost including a few who were among the top 10 overall finishers.

Mountain Kid 1 placed in the top 10 overall for females, while papa placed in his age group. Everyone thought it was an awesome race because it was challenging but faster than a 5K.

Debbie’s Dash: The kids’ race took place at 5 p.m. Saturday, prior to the 5K. It was held on the street in front of the Wheeling Heritage Port. Before the race, a luau was held for the kids, complete with candy and Hawaiian-themed prizes. After the race, as with all the races, organizers gave away door prizes. Again, the Mountain Kids were impressed, especially since they won something.

Debbie Green 5k: The RRCA-certified course is challenging. It features hills throughout the scenic downtown. There is also prize money for the top finishers and top U.S. finishers. The overall winners, age-division champs and master and grand-master winner were named state champion for the state of West Virginia.

The top male finisher finished a little over 14 minutes. The top women were around 16 minutes.

The top U.S. finisher in the female division was Clara Santucci, of Dilliner, Pa., who placed fourth. For those who don’t know her, she won the Pittsburgh Marathon in 2014 and 2015.

Mountain Papa met Santucci before and finally had his picture taken with her. I like the fact that she’s local and is really down-to-earth. When she was introduced, race director Ron Green took the microphone and noted her marathon wins and that she was an Olympic qualifier.  I think he said something about her being a future Olympian. You could tell how proud he was, well everyone was, to have her represent the locals on an international level.

I introduced my daughter to Santucci, who was impressed with her times and asked some general questions. Mountain Kid 1 was impressed but, at the time they met, a little scared.

After leaving the award ceremony early, the kids talked about how much they wanted to do the races next year.

It will be a different dynamic competing against athletes from across the nation. But they are ready for the task and in some ways, so am I. I’m looking forward to doing shorter races. I miss the speed of playing chase or running a lap or two around the track. You run and, boom, you’re done. You don’t have to  worry about electrolytes or dehydration with mile runs. You just go. And that’s what I think pulled the kids back into running. The mile is long but not super long. For now, it’s just right.

And this is how it starts. Lightning struck everyone’s heart with the excitement of running. And the Debbie Green races and Clara Santucci made it possible.