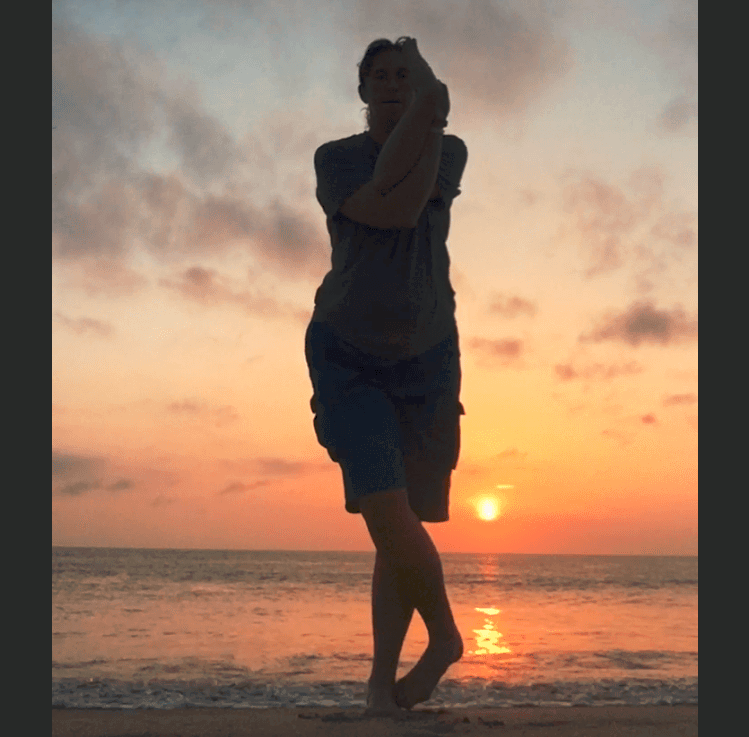 After a long work day of crashing servers and losing important progress, I headed out of the house, with a beer in my pocket and Mountain Papa by my side. We navigated through the dark, up a staircase and across a little bridge.

Then we went back down the stairs. He occasionally looked back as I navigated the dark behind him. I spent more time staring at the stars than at the beach. The sky was dark, midnight blue with so many white spots of various sizes dotting the sky. It was too random for polka dots, it was the nighttime sky at the beach in all of its glory.

He intended to camp out for a while with his bottle in Chardonnay and his camping chair. I knew I wanted to see the sunrise in a few hours, so I stood, watching the crashing waves. Their white tips slapped the sand with to their own thunderous applause. It was calm, soothing.

And there wasn’t a kid in sight.

“We’ve gotten fat,” he said, staring into the Atlantic Ocean, sipping out of his cup. He had weighted himself earlier in the day when Mountain Kid 1 was getting her sports physical.

I nodded in agreement. We both have put on pounds since moving from Appalachia to his native North Carolina. I didn’t see it as much on him as I did myself. He bikes 20-30 miles almost daily. Until that talk, I hadn’t pinpointed the cause for my weight gain.

I looked out to sea in the hopes of spying whatever put Mountain Papa in a trance. I took a long sip of my beer, some exotic brew from a small North Carolina brewery. It steeled my nerves, so I spoke with clarity and with a bit of personal authority. I tend to think faster than I can talk, losing my train of thought easily.

“I think it’s because … at least for me … I don’t walk everywhere anymore. Back in West Virginia, I walked to work, to school to get the kids. I spend my Mondays running errands by rucking throughout town.

“Now that we live in the country, I can’t walk everywhere. It’s 11 miles or so into town, too far for the kids to go with me. It’s just easier and faster to drive.”

He nodded in agreement, taking another sip of wine.

“So, you’re saying we need to move back into the city?”

“Maybe … I’m not sure. I like the quiet and I get to workout in different ways, but things have changed. My activity levels aren’t what they were. “

We then discussed what we are doing right. He bikes into town to work whenever he can, while I help our daughter with cross-country training. We eat moderately healthy. We’re getting certain things back on track in our lives.

But those come with the consequences of living country life. Because there aren’t many homes or vehicles on the road, drivers feel compelled to drive as fast as possible through our neighborhood. My husband got bitten by a golden retriever during a recent bike ride. Luckily the dog wasn’t rabid, but his leg still had deep-tissue bruises from the attack.

We’re both afraid of letting our kids on the road, on their own, because of the vehicles and dogs. I know I often forgo my workout when the neighbors let their dogs out.

We then talked about our plans for 2018. My husband waits to do a triathlon and would like for me to do one too. But I’m aiming more toward a few winter races (Krispy Kreme in February among them) with a few obstacle or GORUCK events. I want to work on my overall fitness and test my mind and body. For me, triathlons are more of a test of my pocketbook  — three events to simultaneously train for and lots of different gear to buy. But I like the adventure and challenge, so maybe I’ll do one.

Sometimes, you need some time away from the kids, staring at nature or being someplace that doesn’t put your parent senses on high alert.

This talk sparked a morning meditation walk the next morning. It was almost two miles on the beach at sunrise. I noticed how labored my breathing was, although I’ve run more than that on a daily basis. I noticed the cold salt water as it washed over my feet as it rushed onto the sand. I noticed other people sitting, soaking in the sunrise and nature (lots of crabs are out at sunrise).

Now that I have pinpointed what is/went wrong with my training, I’m ready to move forward with a better focus. Now to determine what I want and how to best get there.