The Special Olympics have an unique place in my heart.

As a high school student, I helped train Olympians and run events. It was great seeing the sense of accomplishment on their faces. The participants’ enthusiasm was infectious. The memories of these activities have helped fuel a longtime wish to be a coach in some capacity.

It was also through the Special Olympics, this time in West Virginia, that I ran my fastest mile after picking running back up as an adult. At every mile marker of this particular race that benefited the nonprofit, an Olympian and his or her caregiver called out the mile splits. The water stops were manned by enthusiast supporters of Special Olympics.

Toward the end of the race, I chased down a county commissioner and passed him. I thought he was chasing me, so I kept going as fast as I could to the finish line. The person chasing me wasn’t the commissioner, it was my former landlord. He and I often fought together toward the end of several other races and finally, I beat him.

This past weekend, Special Olympics Chowan County held its 5K race and polar plunge in downtown Edenton. Directed by Rachel Johnson, who was helped by students from John A. Holmes High School, this was a small, intimate race that lead us out to the Hayes Plantation and back on paved roads. It was a beautiful course and Kim and Laura Ullom captured it wonderfully with their photographs which are used in this post.

While my daughter and I along two dozen or so participants, made our way through the 5k course, vendors of both food and merchandise set up their wares in the parking lot by the park. The smell of Ya’ll Eat Yet’s food lured me to the finish line, as did my husband’s attempt to help me finish. Honey, I’m sorry for those mean things I said while I was running.

It was great to be able to check out the vendors and unwind at the playground while waiting for the results. It also gave me a chance to mentally prepare for the polar plunge.

A polar plunge is a great fundraiser held by many Special Olympic groups. You basically have a safe place where people can go in and out of some cold water and have something for people while they’re there. I’ve helped cover polar plunges for various newspapers, but never had participated in one. I have had experience with getting dunked in cold water (Oct. 2016 GORUCK Light) and let’s just say, it’s a memory that has haunted me for a while.

But that fear was quickly overridden with the excitement of trying something new.

The polar plunge was in Edenton Bay, by the lighthouse docks. The county’s Emergency Response Dive Team was on-hand to help just in case. A crowd gathered around the bay area to watch. It was cool, but a bit scary, to see all of these people watching us take the plunge. 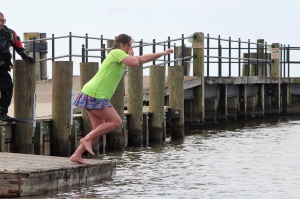 We stood in front of the Penelope Barker House and waited for our name to be called out. When it was my turn, I walked up to the edge and steadied myself as I made the small step down between the edge and the dock we jumped off. I took a deep breath and steadied my nerves. It wasn’t that far, maybe a few inches from the top to the water. The idea just .. brr … already. 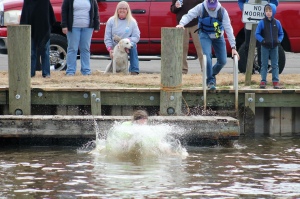 So I cleared my mind, held my nose and jumped. I closed my eyes and next thing I felt was severe cold, while I heard the rush of the water filling the space around me. Then I was OK — the water didn’t feel that bad and I was just floating. I have always loved water — not necessarily the things in it — but I love how calming and powerful water can be.

I cherished my success of conquering my fear for a few seconds, maybe a bit more than the divers would have liked. Then I thought of how this was going to suck, but I needed to get to the surface. The idea of climbing out of the water and getting cold again wasn’t pleasant.

I swam to the ladder beside our “plunging board” and started to climb to the Barker House parking lot. The cold air hit me. “I’m awake, I’m awake,” I mumbled as I made my way up.

I have to say, there is nothing like dunking yourself in cold water to wake up. I had been up for almost four hours by the time we took the polar plunge, but I wasn’t as alive or in the moment as I was when I got out of the water. My body was on high alert, energized. It felt great … until I started to get cold. With a space blanket and towel in tow, I made it back to Mountain Papa’s office with my family to change into dry clothes and take a much deserved trip to a local restaurant to celebrate.

I have to say, the polar plunge was a memorable experience. It’s a well organized event that supports a very worthwhile cause in Chowan County. The organizers and the others who participate in the Special Olympics program here are doing great things. I hope this event serves them well for years to come.

When was the last time you tried something for the first time? Hopefully it was recently. If not, what are you waiting for? Adventure awaits!