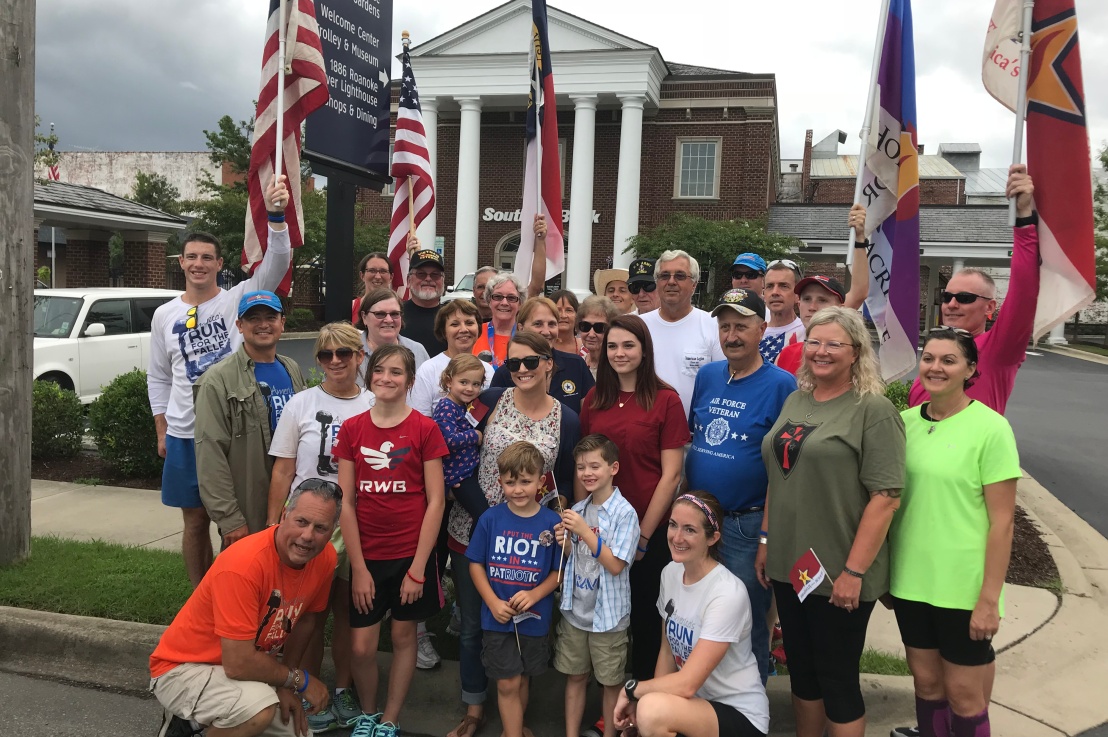 Note: I originally wrote this for the Chowan Herald. This is a modified, longer version, as I had a limited time and space to write. To learn more about Run for the Fallen, visit the website.

On Monday and Tuesday, Run for the Fallen, a cross-country run honoring United States soldiers who died in the line of duty during the war on terror, made its way through my part of North Carolina.

Mountain Kid 1 and I picked them up on Monday, Day 115. They had already gone 62 miles or so that day. We were there for their last few miles, which lead them through our usual running route.

Many of them were energized and upbeat, while I was tired, already having run two miles that morning. How did they have all of this energy?

They were happy and running. They were also respectful and encouraging. It was so cool, but I didn’t know if I would feel the same way after logging all those miles, day after day.

Why are they so awesome?

I had to wait for the answer the next day.

Early on Tuesday morning, MK1 and I meet up with the group. Half a dozen cars and about as many runners gathered near the Chowan County Courthouse on Broad Street in Edenton. After a prayer for safety, hospitable weather and a meaningful run of remembrance, the runners, some carrying flags, began to make their way down Broad Street to Perquimans County, eventually toward Moyock, near the Virginia border. Their goal was similar to every day since April 7 –- run 50 miles or so, stopping every mile to read the name of a soldier, or maybe several — who died in the line of duty since the USS Cole attack on Oct. 21, 2000.

With a loud “WaaaHoo” from one of the more seasoned runners, we were off, running at a 11-minute mile pace, which was doable for me, but for some reason felt hard that day.

Besides MK1 and I, the local school superintendent Rob Jackson joined them, as did several other people from town. Jackson starting running with the group Monday, when Run the Fallen crossed the U.S. 17 bridge into Chowan County.

He said he ran to honor those who served our country and to support the group as they went through Chowan County.

On Monday, Jackson ran with them into town, pointing out Edenton’s historical significance and ties to the military. One of the runners noted how many of the historic homes along Queen Street had American flags in their yard.

“This is one patriotic town,” he said as all of us locals nodded in agreement.

During Run for the Fallen, Gold Star families joined the runners, walking or running the mile dedicated to their loved one who died while serving their country.

JoAnn Boussouar came up from Florida to participate in one of Monday’s honor markers at mile 12. That day, Run for the Fallen read the names of those who died in May. Among them were Boussouar’s son, Sgt. Kyle C. Thomas. Thomas had a 2-week-old daughter, Devina, when he left to go to Fort Irwin, Calif., to prepare for an upcoming deployment in the Middle East. On May 30, 2017, his family received the news of his sacrifice the night before.

Shontae Connelly, of Nebraska, walked mile 55 of Monday’s run, which honored her late husband MSgt. Robert E. Connelly Jr. “Bobby” served in the Air Force as a security forces defender and died on May 5, 2017. At the time, he left behind wife and children Savana, 15; Mickey, 6; Davin, 4; and Vida, 1. Connelly’s family rejoined the Run for the Fallen in Edenton as it finished its last mile Monday.

During Connelly’s honor marker, one of the runners held high a small American flag and a red and white flag reading “Honor and Remember” with a gold star in the center. As Connelly’s name was read, the runner touched the small flags’ poles (they’re more like sticks) to the ground and later handed them to Connelly’s relatives, who wept as the runners gave their condolences to the family.

After Monday’s run, a ceremony was held at American Legion Post 40, in which the names of everyone the group ran for that day were called again. They also gave flags to some of the Gold Star families who were in attendance. The Run for the Fallen runners and their support crew were served a tasty meal prepared by the Legion.

According to Honor and Remember founder George Lutz, “It feels great to come to place like this were we feel welcome, where it feels like people get it.”

Run for the Fallen was created by Honor and Remember as way to make sure that those who died while serving or as a result of serving during the war on terror were remembered.

“It is a way to thank the Gold Star families for giving their loved ones who died for our freedom,” Lutz said.

Gold Star families is a term used for families who have a loved one who died while serving in the military.

Lutz said the best way to remember those who have died is to call their name out loud. It took two and a half years for Honor and Remember to gather the names of the 20,000 people who have died while serving during the war on terror. The list was organized by dates, about 6,000 of them total. Then the 6,000-mile path was created through 19 states. Run for the Fallen started in April 7 in San Deigo, Calif., and is scheduled to end on Aug. 7 in Alexandria, Va., at Arlington National Cemetery.

After the first mile of each run, usually two or four runners run at a time, rotating as their schedule and bodies permit. Their pace averages between 9 to 12 minute miles to keep up with their tight schedule.

Bill and Jill Lewis, of Spring Hope, west of Rock Mount, have been supporting Run for the Fallen since it came into North Carolina. The Edenton natives joined the cause as a way of honoring our country’s fallen military service people, Jill Lewis said.

Bill Lewis has run some with the group since it came to North Carolina. He said that the visit to Edenton was a homecoming of sorts for he and his wife. It was also a way to show the runners and crews the town’s unwavering support for those who served.

He said the end of the day ceremonies, like the ones held in Edenton on Monday and in Moyock on Tuesday, are great because they give the runners a way to concentrate on all of those whose names have been called during the day.

“It lets you honor them and then move on to the next day,” he said.

For Mountain Kid 1 and I, the honor marker ceremony was the most moving. During this particular mile, an older woman came to run with the group. She had been training so she could jog with the group and had been following Run for the Fallen everyday on the live feed.

As we got closer to the end of the mile honoring her son, her husband, gently holding a photo of him in his uniform, stood on the side of the road.

Each honor marker, noted the day, the mile and the date of the person who died. Then the officiant, it rotated between the runners, asked if there were any family members present. They would say his name while another runner held the two small flags and touched them to the ground. The tears in the parent’s eyes made it feel as if it was the son’s passing was just yesterday. It was still raw, real, tear at your soul, mourning.

After the ceremony, they took a photo of the family. The parents had a little angel pendant on a corner that the mom tried to keep in the proper place while the photo was taken. It was a gesture of love.

Then, we put the flags on the truck bed — four in total with mine being the fifth — and each person who participated in the ceremony gave the family a hug. What do you say to someone in a situation like this? I said the only thing I could think of, “I’m sorry for your loss.” And we hugged. They didn’t mind the sweaty, smelly runners. They appreciated them and how their son was remembered.

The woman joined us for the final mile. Connelly’s family joined us as well. The older woman told one of the boys how her son died when his oldest son was about his age. They held hands the entire mile. Grief united these two souls, just for a mile. It will continue to do so as Run for the Fallen continues.

On Tuesday, my daughter felt energized. The run was inspiring for her enough to want to start another Team RWB chapter in the little town of Edenton. I support her, but I know how much work will need to be done.

Tuesday’s first mile was comfortable until it wasn’t. I think I was just off that day, because the pace was something I should have felt comfortable with. But MK1 and the group carried me to the first honor marker.

As the flags were raised high in the air and the named were read, I felt energized. Like someone up in heaven was smiling on us all.

I could have gone some more but decided to play it safe. Maybe this time next year, I’ll be more prepared.

When you participate in something like this, you have to have a goal that’s bigger than whatever life throws at you. For one runner, it was to honor her family member who died and to represent all the other Gold Star families. For others it was a love of country. Some were veterans or active duty, so they honored their brothers and sisters who died.

For a brief moment, while I was with them, I felt like a part of something greater than me. Some energy that needed to be known. It’s not for everyone, but when you get it, it’s something that drives your forward to something positive and bigger than yourself.

I felt it at the Marine Corps Marathon in 2015. Seeing the selflessness of some of the Team RWB Eagles on the course just made my heart grow more in love with the organization.

Seeing people from different walks of life some together to do something together — honor our nation’s fallen soldiers — has that same unifying spirit. It gives off an energy that others that don’t participate don’t feel. But if you watch and listen, you get some of that energy, and you feel like you can do great things.

If you have a chance to participate in a cross-country event, do it. DOOOOO IT! You won’t regret it.