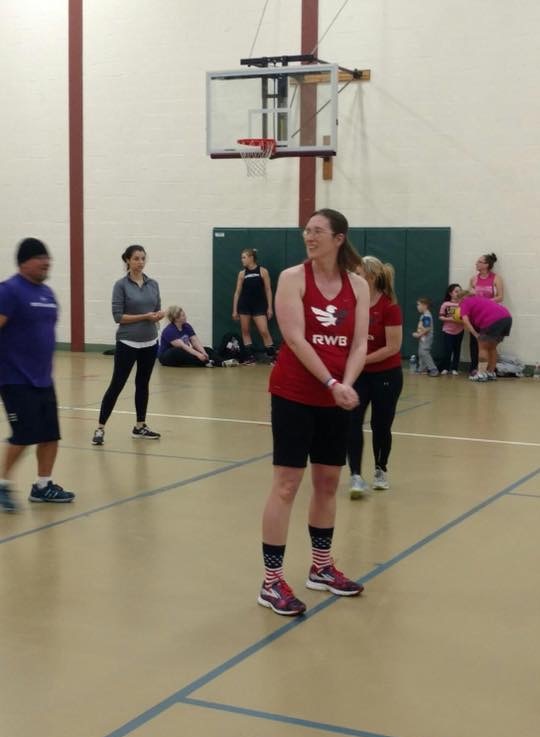 A shorter version of this is appearing in the weekly newspaper, The Chowan Herald, based in Edenton, N.C. Since the paper doesn’t have a web presence, yet, I’m publishing it here with photos and more. The anniversary of my dad’s funeral, where I gave the most heart-felt incoherent speech I’ve ever known, is soon approaching. When I don’t feel like doing anything, due to allergies, depression, general laziness, etc., I think of my friends at Team Red, White and Blue and this one particular quote.

“You honor those who died before you by living.”

As Memorial Day nears, I’m reminded of this quote that came from several of my friends who have served our country.

In particular, I think of my friend Miguel.

The 20-year Army veteran served two tours in Iraq and one in Afghanistan. My family and I saw him during a Memorial Day service last year. I could tell that something was a bit off. The proud man, who speaks seven languages, seemed crestfallen.

“You don’t want to see me when taps starts playing,” he said, kind of half joking. “I just start balling.”

Under normal circumstances Miguel and I probably never would have met. I saw him at several local road races, carrying a camo ruck with almost 35 pounds in it as we went along the courses. He was there, but we never said anything to each other.

We eventually met through Team Red, White and Blue, an organization that works to enrich veterans lives through social and athletic activities. Both civilians and veterans can join for free. Miguel was among the veterans who started participating in the organization by attending our social events. He is pretty much a happy guy who likes to joke and tell war stories. But don’t disrespect the flag or the military, he will quickly give you a piece of his mind.

Miguel knows the pain of war, having lost several of his fellow soldiers on the front lines. When he came home and retired, he became a postal carrier. He’s an avid supporter of veterans issues and through Team RWB has taken the lead in several of our athletic activities.

To be honest, at first, I was a little intimidated by Miguel. I usually have a hard time dealing with people anyway (I’m horrible with names and am pretty shy), but he has an air about him that commands respect. He tells it like it is and I think, it look me a while to embrace how cool and open to new ideas that makes him. But after participating in a few activities with him and getting to talk one-on-one with him, I felt as if I was hanging out with my kids.

Miguel is an excellent instructor. Our chapter just wrapped up its participation in a volleyball rec league. I participated in our early matches, in which a blend of veterans, civilians and kids took to the gym in our red shirts with the “Eagle,” the Team RWB logo, on them. Unfortunately for me, we moved mid-season. There were a few injuries during the season, Miguel being the first. But he always came out and cheered us on and offered some pointers to us. 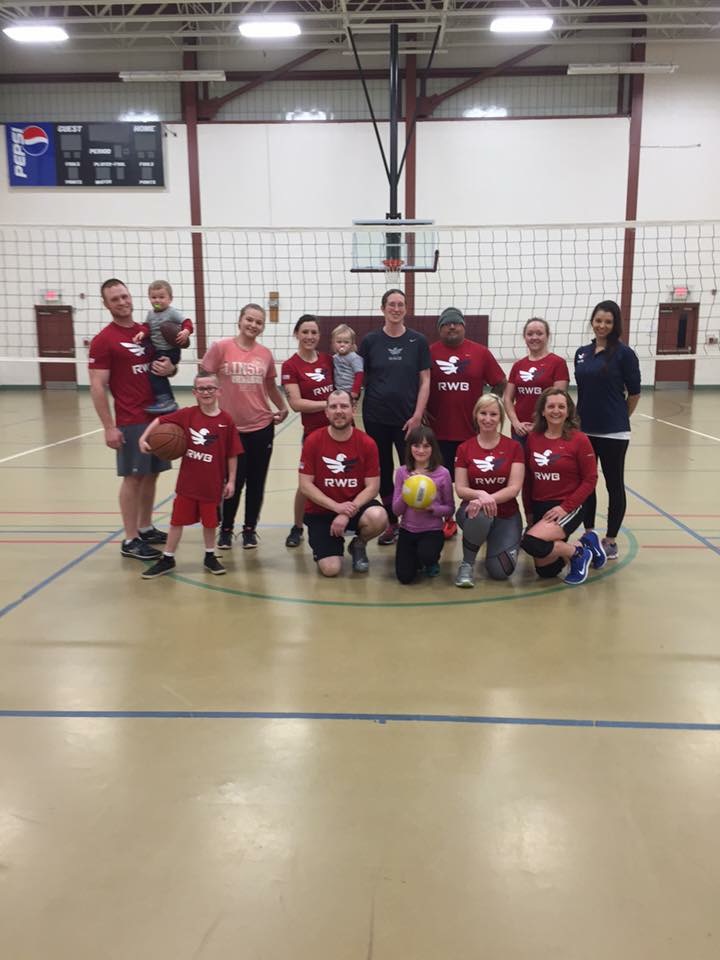 The Team RWB Wheeling Chapter’s volleyball team, during one of our first matches.

One evening before a game, Miguel showed my daughter, Mountain Kid 1, some of the basics of volleyball. She had never played the sport, but was eager to learn how to bump, set and spike. He was patient and kind and kidded around with Sam as if she was his own daughter.

The team was a rag-tag group, with volleyball enthusiasts and newbies alike. The league director, who served in the Vietnam War, was patient with us and taught us the ropes between sets. He ended up joining our chapter a few games into the season.

After one of the recent matches, one member remarked on how the volleyball team, and Team RWB, brought great people into her life that she wouldn’t have known otherwise. These strangers became friends and teammates through the bond of volleyball.

I can also attest to this. Since 2012, my running has brought wonderful people into my life that I wouldn’t have known otherwise. The addition of Team RWB to this mix, helped me achieve more than I ever thought I was capable. It took some nudging from people like Miguel, who knows how to bring out the best in people, to see that potential and push forward.

This can also be seen in other adult and youth recreational leagues across the nation, including here in the offerings of the Edenton-Chowan Recreation Department. People who usually don’t meet, find a common bond through sports. And it snowballs from there. During a break in play, you learn of someone’s love of your favorite music band or a favorite shopping destination. Then you become friends.

“You honor those you died before you by living.” Miguel and other Team RWB members, who have served in our nation’s military, know how to truly honor those we remember on Memorial Day. I’ve seen them do it every day, even when they feel they are at a low point.

Recreation leagues are among the many activities that offer a great way to truly live.